From the Regional COMMIT Youth Forum to my COMMIT-ment 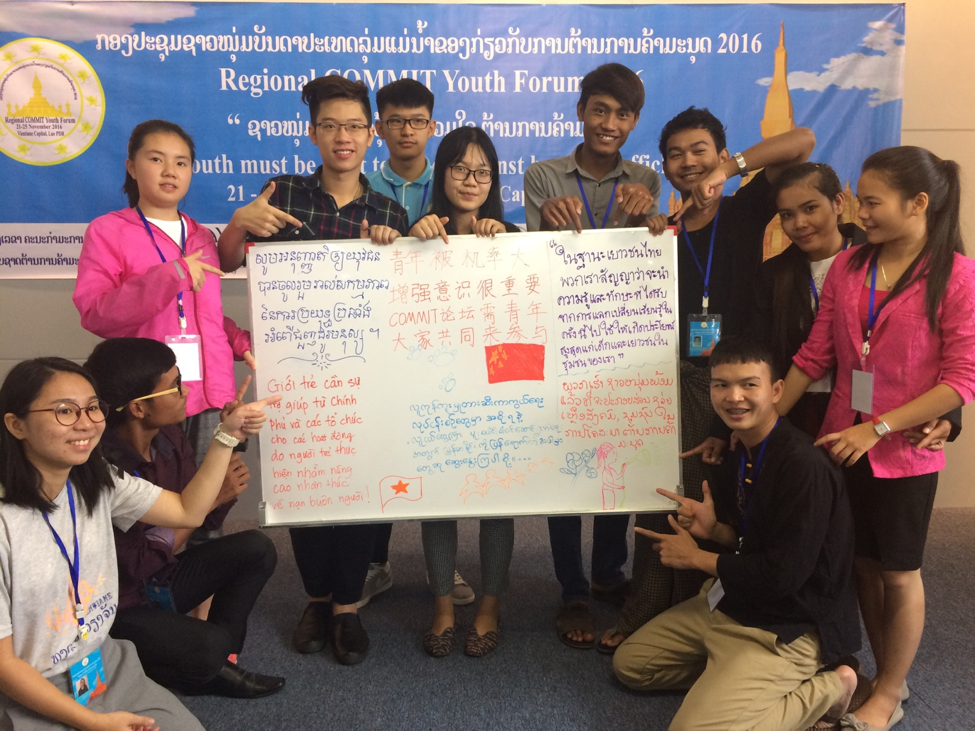 By Ngoc Thi Minh To

Last summer, I spent almost 3 weeks in Siem Reap (Cambodia) to join a youth-led project on human trafficking prevention. Just a few kilometers away from lavish nightclubs and luxurious residences in the heart of the town a totally different world exists: a lot of people are suffering from extreme poverty, living in dilapidated shacks, and desperately migrating to cities or even other countries (often irregularly) to make ends meet.

To be honest, I could never imagine how brutal human trafficking was until I talked to local children. There was a girl whose older brothers followed “friends” to cross the border to Thailand for promising job opportunities and didn’t come back for 10 years. Her family heard that one of the boys had died in Thailand but they didn’t know anyone to contact or have the money to bring his body home.

I heard a lot more stories about unsafe migration and “family friends” taking the children’s siblings away that made me feel sympathy for the victims and indignation toward the traffickers. That summer changed me forever.

Returning from that life-changing trip, I became seriously concerned about human trafficking. Looking back on my project in Siem Reap, I thought we, as a group of young people from around the region, still lacked the knowledge and experience to effectively tackle an issue as complicated as human trafficking. Though our aim was to spread information and warn children about human trafficking in a particular at-risk area, sadly the results did not meet our expectations. There were language barriers, ineffective methods to distribute messages, and the project seemed unsustainable.

The 5-day forum in Laos was definitely an unforgettable journey. I was most interested in two specific sessions: 1) the exchange sessions for the youth delegates, government, and organizations on the response to human trafficking and 2) the training session on how to deliver positive messages to help prevent human trafficking.

The former gave me an insight into human trafficking in the region through presentations from specialists at Save the Children in Myanmar and China and from a friend living in rural Pathet (Laos). Stories from other delegations contributed to a general picture of poverty, migration, exploitation, and human trafficking in the Greater Mekong Sub-region; those were issues that a young girl living in an urban middle-class family like me had never ever envisaged before.

Through the latter session, I figured out why our summer project was not as successful as we had hoped: we relied on negative messages like “Don’t do this, don’t do that” to raise awareness of human trafficking and unsafe migration. We had thought that positive messages were not cool and alarming enough but they are indeed more effective. Had we realized it sooner, then we would have implemented other ways to raise awareness about human trafficking among children in Siem Reap.

After the forum, I spent more time reading books about human trafficking, victim empowerment and development projects. I’m sure young participants of any youth forums, conferences, or camps are extremely enthusiastic to carry out youth-led projects based on lessons learnt from their programs.

With the lessons learnt from my summer project and the Regional COMMIT Youth Forum, together with my genuine ambition to liberate the vulnerable from the hands of human traffickers, I will continue learning and community organising to prevent human trafficking.

I COMMIT to fight against human trafficking!

In 2015 when IOM X was just a few months old we brought together 20 youth leaders from all 10 ASEAN countries in Bangkok for the IOM X ASEAN Youth Forum. The goal was to connect with amazing young people who were passionate about social change and the issue of human trafficking and to share … END_OF_DOCUMENT_TOKEN_TO_BE_REPLACED

How to make a t-shirt

How do I get out of here?